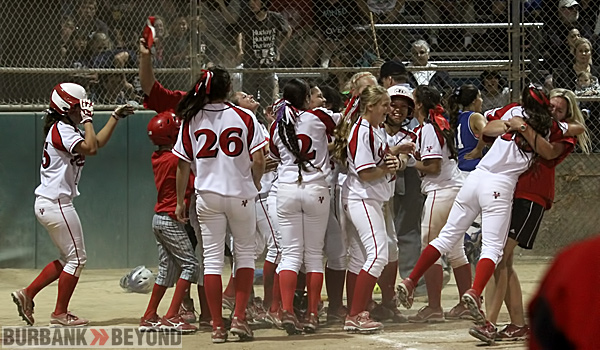 For much of this season Burroughs softball listened as Burbank coach Nicole Drabecki proclaimed her team’s talent was enough to wrestle the Pacific League championship from the Indians’ grasp.

It also read headlines were Burbank’s freshman sensation, Caitlyn Brooks, grabbed much of the attention for her presence on the mound. One would have thought

As it turns out, Burroughs has a pretty good freshman as well in third baseman Michelle Santiago. And on a night where Brooks was good, Santiago was better.

On Thursday, May 10, in what equated to a league championship game for both teams, she delivered in a performance she will remember not only the rest of her high school career but the rest of her life.

Santiago led off the game with a monstorous home run to left-center field that cleared the MacCambridge Park fence and reached the peaks of the pine trees just beyond. Then, with one out in the 8th inning the freshman drove a deep flyball to right field that easily scored Brice Edrington with the game winning run as Burroughs topped Burbank, 2-1, to claim its third straight Pacific League championship.

“We have four freshmen who are pretty special too, all on the varsity roster and all playing some pretty special softball right now,” Burroughs coach Doug Nicol said. “We didn’t announce them to much fanfare at the start of the year, but we know what they can do.”

Edrington led off the extra frame with a single. She was sacrificed to second on a bunt and then reached third on passed ball to set the stage for Santiago. Santiago delivered and Burbank went down with only a minor threat in the bottom of the inning, stranding a runner on first.

Burbank had the winning run on third base in the bottom of the seventh inning, but a bizarre bunt attempt with two outs and two strikes twarted the rally short. Nicol called the attempted bunt, “shocking.”

Laina Do scored Burbank’s only run in the second inning on a groundout from Lily Wynn.

The win marked the fourth consecutive year that Burroughs has swept the Bulldogs. It clinched the league title out right, secured the top seed out of the Pacific League for Burroughs, knocked Burbank to the third seed out of the Pacific League — all but ensuring a road contest for the Bulldogs to open the CIF Southern Section — and clinched the second league championship for Nicol.

Haley Schulman went the distance, striking out 10, walking none and allowing only two hits.

“When you can out there in front of a full house and stay in your game all night it is pretty special,” Nicol said. “She had to end it by striking out Katie Hooper, arguably the best offensive player int he league.”

As all championship games should be, it was cleanly played by both teams from the start. Neither team made an error on the evening, and both teams took quality at-bats.

“We hit the ball really well, but at people, so did they,” Nicol said.

Although both teams lose some talent to graduation next year — namely Lalani Hernandez for Burbank, Schulman and Indians’ catcher Shannon Trujillo — both teams played four freshmen among their top ten players this season. The future looks bright for both programs.