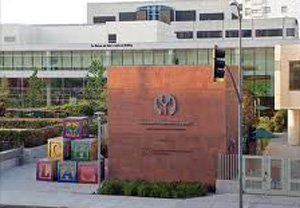 Emergency personnel responded to the 300 block of E. Andover Dr. Tuesday afternoon, in response to a young child falling out of an upper story window.

The unidentified 4 year-old boy fell out of his family’s second floor apartment window at 4:42 p.m.  He was apparently jumping on a bed, and fell through the screen on the open window.  Although the apartment is on the second floor, it is over the garage area, so the fall was equivalent to falling from the third floor, about 35 feet.  The child landed on pavement.

According to police, the toddler was conscious and responsive when police and fire fighters arrived at the apartment building, which is located across the street from McCambridge Park.  The boy was bleeding fom a laceration to his scalp, bleeding from his nose.  He was treated at the scene by Burbank Fire Department paramedics, and transported by rescue ambulance to Children’s Hospital of Los Angeles.  His mother accompanied him in the ambulance, while his father was driven by neighbors to the hospital.

The extent of the boy’s injuries was not yet known, but he was listed in “good” condition according to police.  The child will be kept overnight at Children’s Hospital for observation.

Police believe the incident was an accident, but it remains under investigation.

Man Arrested for Copper Wire Theft After Confrontation on Roof