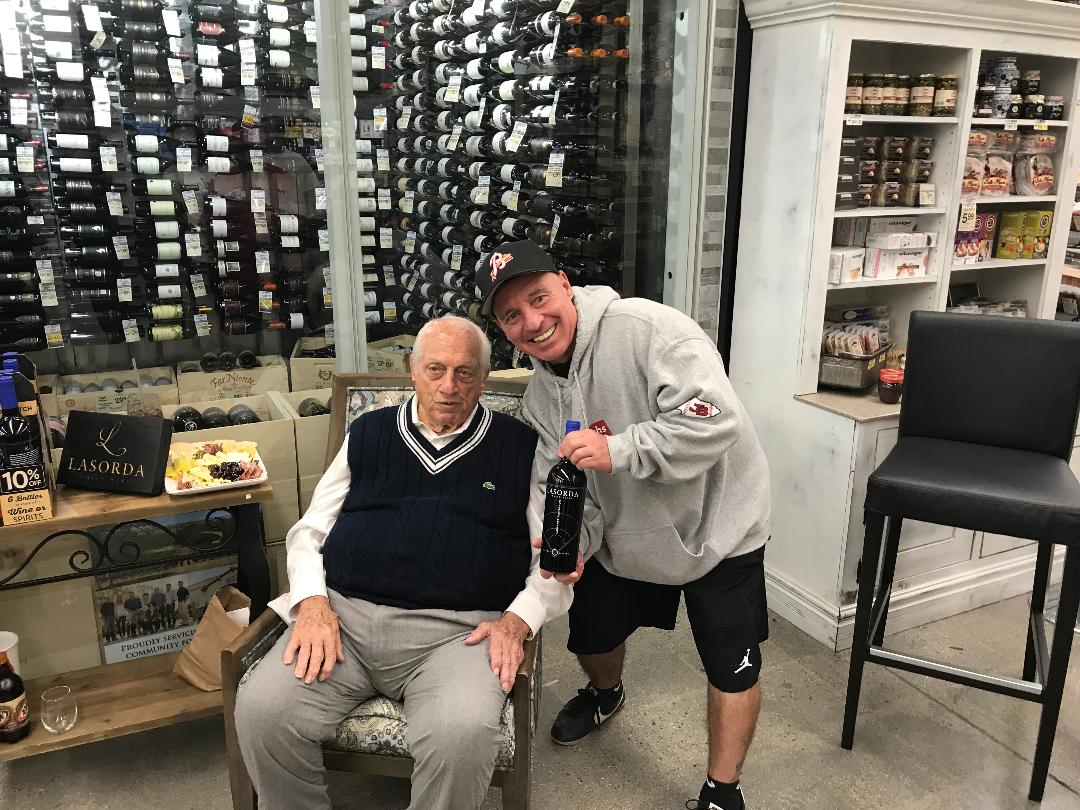 Longtime Los Angeles Dodgers manager Tommy Lasorda and his family were at Pavilions in Burbank on Saturday to promote their Lasorda Family Wines.
The 91-year-old Hall of Famer greeted fans and signed bottles of his wines, which began last year under the direction of nephew David Lasorda.
“About 12 years ago Tommy was doing a wine under an Italian label. They imported a few different Italian varietals,” David Lasorda said.

Eventually that relationship ended and in recent years the younger Lasorda suggested the idea of doing something based closer to home.
“I said let’s bring the Lasorda label back to life. I came in and built it from the ground up,” David Lasorda said. “We have a wine maker that works full time with us. We have a winery and tasting room in Paso Robles. Right now we have our Cabernet Sauvignon and our Chardonnay, both Central Coast wines, a Monterey County Chardonnay and a Paso Robles Cabernet.”
David Lasorda said they have been impressed with the success under the work of Terry Culton, who is the winemaker.
“They’re award winning wines. We’ve won gold and silver medals at a number of the California and nationwide competitions,” David Lasorda said. “We’re only a year and a half in. Last year we did only 800 cases. We went through those. Now we’re increasing to 2,000 cases a year in our second vintage. The sky is the limit.”
David Lasorda said he sees tremendous potential for growth.
“We’re planning on launching our wine club this next year,” he said. “We’ll be introducing some new varietals. We’re experimenting with some Pinot Noir or a red blend to be our next varietal.”
Keeping the customers happy is something David Lasorda said he wants to keep in mind.
“We like what we’re doing and are happy with the wines we’ve put out. We want it to be a high-quality wine, but we also want people to be able to come into a grocery store and buy one for under $25 a bottle,” David Lasorda said.
For those who want to take a weekend road trip, Lasorda wines can be found at the tasting room in Paso Robles. It is open Friday, Saturday, Sunday from noon-5 p.m.
More information can be found at www.lasordawines.com.

City of Burbank Craig Sherwood - March 2, 2021 0
City files suit to have Tinhorn Flats shut down. Asks for injunction to have electricity cut and doors padlocked along with paying all court costs

Column: Karen & Barry Real Estate News and Views – A Recession Does Not...