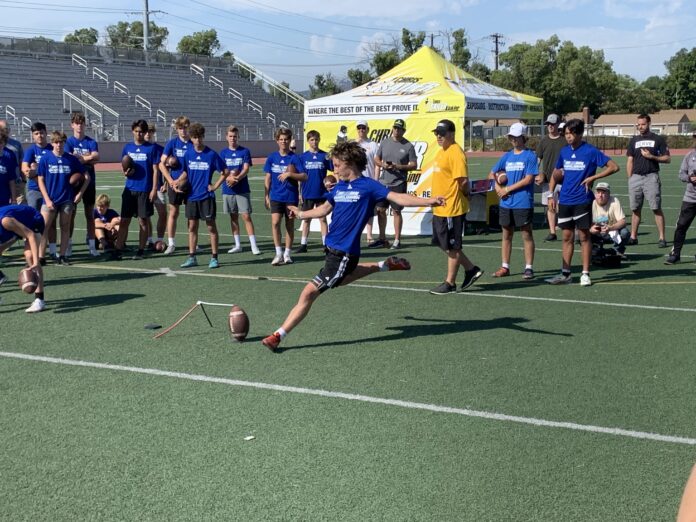 Some of the top high school kickers and punters in the nation found themselves on the campus of John Burroughs High this past week as local kicking legend Chris Sailer hosted the Rising Seniors, Top 12 and Underclassmen kickers in three separate events.
With more than 100 participants in the underclassmen event over the weekend, many of the top up-and-comers got a chance to see where they compare to their peers on a national level.

“I was really excited to kick here and get ranked and see what I could do,” said Aiden Migirdichian, who will be a freshman at Orange Lutheran, which is part of the prestigious Trinity League.

Early Sunday Migirdichian kicked a 45-yard field goal, but missed from 48. He said he has four trainings a week at Orange Lutheran and is one of three kickers, one in each grade, that are competing for the backup position behind senior Dieter Kelly, who is a Top 12 kicker.

Chris Freebury of Rancho Palos Verdes saw his son Dylan, who will be a sophomore at Palos Verdes High, kick a 55-yard field goal.
“He’s been taking free kicks his whole life and that’s why he’s got that magic form,” Chris Freebury said of his son, who also plays soccer. “I couldn’t believe it I was crying. I was in tears.”

Doug Bost traveled from Arkansas with his son Brody to compete in the camp.
“He’s the youngest one here. He’s going to be a seventh grader. The next closest are ninth graders out here. We’ve been doing it since he was in the second grade,” Bost said. “In the ninth grade is where it gets more rewarding. I coached seventh through 12th grade high school football for 20 years and I could never find kickers in my program so when I got out I thought that would be good for my son to learn how to kick.”

Brian Lemmermann came out from Texas with both of his sons, Kyle, who is a Top 12 kicker and Clark, who is going to be a high school freshman.

He said his older son is already drawing interest from schools like Texas A&M, Arkansas, Texas Tech and the University of Texas.
CJ Wallace, is an incoming freshman at St. John Bosco of Bellflower, one of the top programs in the nation. Wallace, who is also a baseball prospect, said his longest field goal is 52 yards, which he said puts him as his high school’s second best kicker.
“(Chris) Sailer has been so helpful with my process of kicking and Joey (Cejudo) has been very helpful,” Wallace said of the camp coaches.

Luke Crudgington came to the camp from Texas. He kicked a 50-yard field goal to earn FBU (Football University Freshman All-American) honors.
“It was to get exposure but then when I realized I could play for the FBU Bowl it was kind of like a goal,” he said. “Also I wanted to see how I stacked up against older kids and kids my age.”