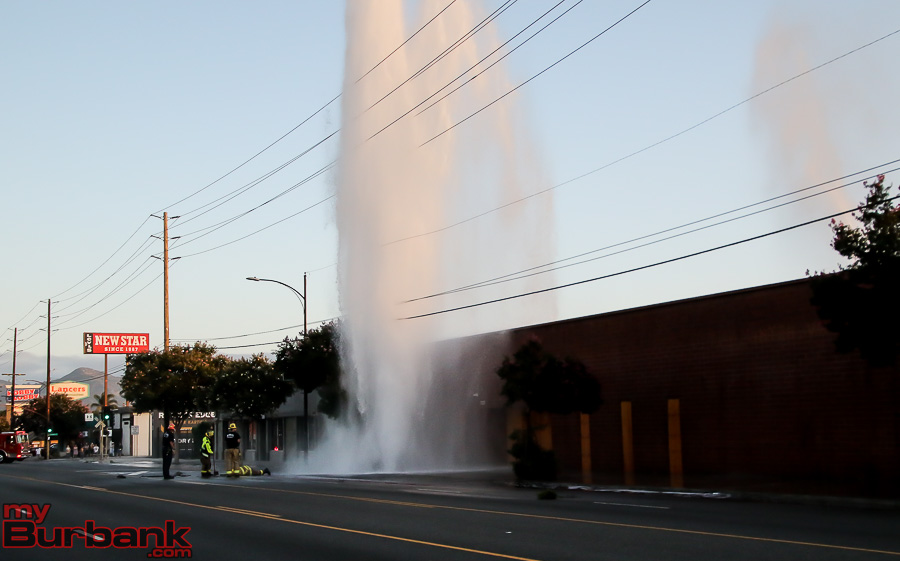 Most Burbank residents had their lights flicker and some internet connections go down around 7:30 pm on Tuesday evening after a Fire Hydrant was sheared off and the water geyser went some 100 feet high into powerlines on Victory Blvd. near Chandler.

Burbank Police responded and contacted witnesses who reported they saw a dark vehicle strike the hydrant and flee southbound Victory Blvd. those witnesses also supplied the officers with a license plate.

Burbank Police responded to the 200 Blk of West Tujunga where they located the vehicle that had damage to its front bumper and the alleged driver according to Burbank Police Sgt. Derek Green the driver identified as Daniel Ramirez a 45- year old resident of Burbank was placed under arrest on suspicion of driving under the influence and hit and run.

While Burbank Police were doing the investigation part of the accident the Burbank Fire Department had responded for the sheared fire hydrant, once the water flow was stopped they discovered the water had landed on the rooftop of several businesses and the weight of the water caused the roof to collapse. The amount of water that collected inside the Production Studio was nearly 8 inches deep in areas. The Fire Department brought in two truck companies and 2 engine companies to pump, squiggly, and help remove the water.

Because of the amount of visual damage, the Fire Department requested an official from the Burbank Building Department to respond and they RED TAGGED  the building that it is unsafe to occupy.  The dollar amount caused by the flooding is still being tabulated.