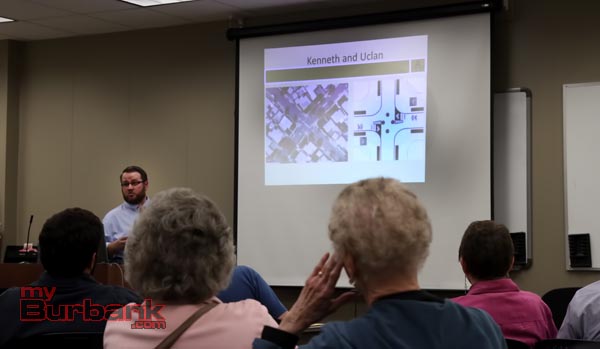 City planners gained a better idea of what infrastructure barriers residents in high traffic neighborhoods would support during two community workshops — one held Feb. 10 at Buena Vista Library and the other on Wednesday at the city’s Administrative Services Building.

The city has received a Safe Routes to School grant to improve safety for children who walk or ride bicycles to and from local schools.The Keystone-North Kenneth-Winona Bicycle Boulevard Project is the first in a network of Bicycle Boulevards planned throughout the city. These are the first of three workshops planned to come up with solutions most residents will be content with, officials said.

The grant would cover 90% of the construction costs to add barrier infrastructure and the remainder comes from local money that is specifically designated for bicycle and pedestrian improvements, said Cory Wilkerson, assistant transportation planner with the Community Development Department.

“So we take this small pot of money and we use it as leverage to get grants so we end up saving a tenth of what we would have spent otherwise and this enables us to do a much more substantial project,” he said.

The Feb. 10 meeting drew 45 people and it addressed Keystone Street from Pacific Avenue to Riverside Drive, which has numerous schools along that corridor. Residents living to the south of Olive Avenue were opposed to adding traffic circles or entry islands to street corners to slow down traffic, Wikerson said. But reactions were mixed from residents living to the north of Olive.

Keystone is a residential street but because it has signals at all the major arterials that it crosses, it becomes a north/south alternative to Buena Vista Street, which is just a few blocks away.

“The residents living north of Olive Avenue were much more interested in seeing these types of calming traffic treatments put into place whereas the residents south of Olive wanted very minimal or nothing at all,” Wikerson said.

One of the areas of concern was where city planners are proposing a traffic circle at the intersection at Oak and Keystone, which is next to St. Finbar.

“A lot of people thought it was going to cause further delays on Keystone during that a.m. drop-off and p.m. pick-up time at school and so those residents said they wouldn’t want to see something like that there but they wouldn’t mind some more visible crosswalks,” he said.

An example of a more visible crosswalk is the Continental Crosswalk, which has thick vertical stripes, similar to those the Beatles are walking across on The Abbey Road album, which shouldn’t have any negative impact to the neighborhood, he said. Residents seemed more comfortable with that, he added.

Dana Morris, who lives on Keystone between Alameda and Oak, was opposed to the traffic circle at that location, she said, because that portion of Keystone already is heavily congested. Wary that creating a Bicycle Boulevard will bring in even more traffic there, she hopes city planners will consider each block along Keystone and create a better balance of bicycle and vehicle traffic.

She began talking to neighbors about the Safe Routes to School project after the city introduced it last summer. She went before City Council to ask about the project last September. She even created a Facebook page — Stand Up for Keystone — to educate and inspire neighbors to share their concerns. From Sept. 10 until the end of October she walked the full length of Keystone, getting feedback and distributing fliers that introduced her Facebook page. She noticed along the whole stretch that bike route signs have been added.

She is also seeing neighbors adding fencing to the front of their properties and with cars parked on the street, visibility when pulling out of the driveway is impeded even more.

“I just think there are things we need to address before we turn our street into something that’s going to have share lanes down it,” she said. “And they keep telling us they are not are talking about bicycle lanes. They are talking about making the street into a fully operational bicycle/car lane. And we really don’t have kids traveling by bicycle on our part of Keystone going to school.”

The city should look at the project on a block-to-block basis because each block has its own characteristics, Morris said. And, she added, the city needs to determine if the projects the grant covers are for projects we really need.

People living north of Olive on Keystone were mixed to the proposed medians and traffic circles, especially the one near Burroughs, Wilkerson said.

“At the corner of Keystone and Clark, there was one resident who lives a few doors down from that intersection and he said he thought the traffic was terrible during school drop-off and afternoon pick-up and it is always going to be terrible regardless of what is done, but he thought the traffic circle would do a lot for the rest of the day.”

Another lady was concerned that it was going to make it more difficult for her to get out of her driveway, he said.

When city planners present the second meeting they will try to iron out the concerns of those opposed to the treatments.

“We’ll bring what we think is consistent with what a good chunk of what the people were asking for and then we can get further feedback from that second meeting,” he said.

With the Keystone project, it was more definitive what people want or don’t want, than the Kenneth Road project, where residents on Wednesday voiced more concerns about treatments.

“They recognized there are traffic issues on those corridors but they wanted us to go back and look at alternatives, he said.

About 25 residents living on or near Kenneth Road from Buena Vista to Muir Middle School attended the workshop for the North Kenneth to Winona project.

“We’re going to take the comments and feedback we received and look at what we think the residents along this corridor are interested in and not interested in and look at whether or not we still have a project after that is said and done,” he said. “If we think there are some components that will allow us to proceed with the project, we will send out a notice for a second meeting to discuss what that project might look like.”

Kenneth Road, a scenic thoroughfare, is a popular route for residents to walk their dogs, jog or ride bicycles. But at high traffic hours, in the morning and when school gets out, the number of cars increases. During peak drive times, drivers also use Kenneth as an alternative to Glenoaks. In addition, more drivers take Winona because it connects Buena Vista Street to Glenoaks.

The city is considering installing barriers such as traffic circles, placed at residential intersections along Kenneth, that vehicles would have to slow down to go around. But neighbors said they are dangerous to maneuver and would slow down response times for police, fire and emergency transport vehicles.

Residents expressed concern that the streets weren’t wide enough to accommodate this option. In particular, residents with recreational vehicles said they would have trouble clearing the circles and those who live on a corner would have difficulty getting their motor homes in and out of their driveways.

Raffie Yeremian, who lives at the corner of Myers and Kenneth, believes a traffic circle might work at larger intersections, like at Keystone and Kenneth, he said.

“I don’t think they will work at every intersection but I have seen them in Orange County work pretty well,” he said. “But I’m for anything that will slow traffic down. I notice that between Eton and Buena Vista where I walk traffic is much faster than it is from say Bethany to Glendale because there are more stop signs from that portion on.”

Many residents said increased law enforcement — ticketing — during morning and school dismissal hours and more stop signs would be the better solution.

Yeremian said his parents live on Olive, and he said after a stop sign was added to Harvard, he noticed traffic slowed down along that area. He also suggested adding bulb-outs, which is a curb extension that extends the sidewalk and reduces the crossing distance, which he saw work well when he lived in the Magnolia Park area of Burbank.

Kathy Depp lives near Groton and Kenneth and walks along Kenneth with her husband five days a week. The main traffic snarl up is in front of Muir, when parents are dropping off their children in the morning, she said.

“They can’t drop them off two blocks away, they have to drive them right up to the school,” she said. “Too bad these kids can’t get a little exercise — they’re not going to ride a bike. They won’t even walk.”

She is against the traffic circle barriers, she said.

“I think they are dangerous and I don’t like the curbs coming out,” she said. “I think if there were more police on Kenneth, that would deter the people running the stop signs. And it would be needed just in the mornings and when the kids get out of school.”

Penny Padgett, who lives near Eton and Kenneth, has a view from her home office window of the traffic flow coming from Kenneth. She likes the idea of the circle barriers.

“I like them. I think it will slow people down. We need to do something,” she said, adding that the traffic is heavy on Kenneth all day long.

She is four houses from the corner and sees that drivers are already traveling very fast, which tells her, she said, they probably failed to stop completely at the stop sign.

She agreed that more law enforcement would help as well as placing speed bumps near the stop signs.

Padgett was impressed that the city was able to receive the grant and that residents were informed about Wednesday’s meeting.

“I know it’s a long process and we won’t see a solution over night but at least they are letting us know what’s going on,” she said.

Councilman Bob Frutos attended the meeting and was impressed with the way the neighbors said they didn’t agree with the options they had seen, but were still open to a continued dialogue to find better solutions.

“We need to work aggressively to prevent any child from getting run over,” he said. “Reducing speed is critical. People are on their cell phones and they are in a rush. Public safety, after 28 years — that’s my passion. But when we can come together collectively and when nobody raised their hand to stop the project, that tells me we are on the right course.”