As construction continues on the new IKEA on San Fernando Boulevard, city officials are looking into how to better manage traffic to and from the store.

Last year, the City Council approved the name IKEA Way for the new section of First Street (from Providencia to Santa Anita avenues) and Traffic Commissioners would like to see the street name extend further north so that the road would tie in to the freeway interchange at Olive Avenue and Verdugo Avenue, said Justin Hess, Burbank’s assistant city manager and interim community development director.

City Engineer Ken Johnson said the “potential street renaming is to better equalize traffic entering and exiting the new IKEA site,” and commissioners are scheduled to discuss the matter next month. The council will then address the matter early next year.

The purpose for renaming the street is not just to promote IKEA, Johnson said.

Johnson said the traffic report for the project indicates the interchanges that will be affected will be Alameda Avenue and Verdugo and Angeleno avenues. 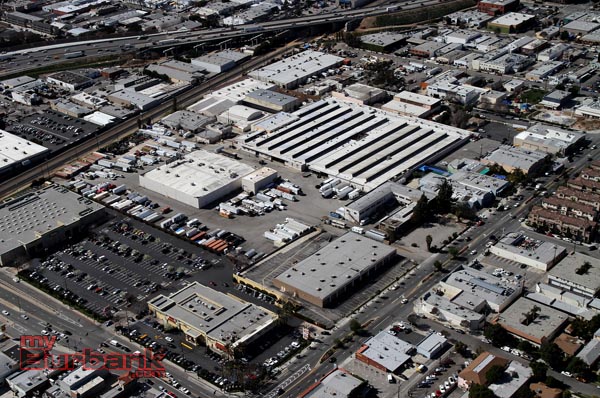 Site of new Ikea store (Photo by Ross A. Benson)

“Alameda will be more impacted, and there are a number of traffic improvements planned there,” Johnson said. “But if we can shift as many cars to Angeleno, that would really help. If we can name the street up to that area, it’s possible we could get a sign on the freeway.”

That sign could direct shoppers to exit at IKEA Way, Johnson said.

Johnson noted that the large IKEA store sign will be visible from the freeway, but for those traveling south, they may not see the sign until they pass, or are at, Verdugo, and would likely exit Alameda.

There are four businesses that have addresses on First Street in that area, and two of them, a hotel and restaurant, have no problem with the name change, Johnson said.

A small business and another business oppose it, although one of the two may be moving, Johnson said, adding there do not appear to be “material issues associated with the renaming” in a city staff report.

David Kriske, assistant community development director for transportation, said the traffic study for the project assumed about 6,800 trips per day will travel to IKEA on a Saturday, the day the most people are expected.

Of those trips, the study assumed about 58% would travel on IKEA Way, meaning 3,900 trips on a Saturday, Kriske said, adding that there would be some other trips using IKEA Way to access local uses.

Kriske said he hoped the number traveling on IKEA Way would go up and also hoped it maintained at 58%.

“Traffic engineering is a lot of judgement and forecasting, it’s not always perfect,” Kriske said. “The purpose of the renaming is to doubly reinforce that we want IKEA Way and Olive and Verdugo to be used to get to the front door versus San Fernando and Alameda.”

The Traffic Commission is scheduled to discuss the renaming of the street on Dec. 3.