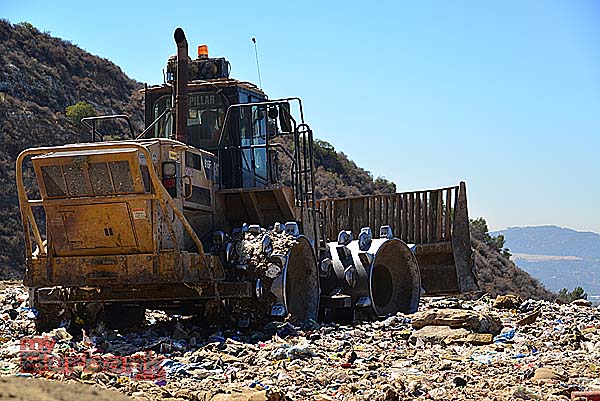 Trash is one of those things we all take for granted.  Whether it is simple garbage, discarded furniture and appliances, or e-Waste, we throw it into a bin, container, or leave it on the side of the road and within a day our discards are collected and disappear forever.  Out of sight, out of mind.

Not out of either sight or mind for John Molinar, Assistant Public Works Director, Street and Sanitation, at the City of Burbank.  John is responsible for getting waste off the street, determining what to do with our waste, and even recovering value from waste during its return to the earth.

According to Molinar, waste generally heads in one of four directions.  First, our general waste is sent to the main Burbank Landfill which is adjacent to the Starlight Bowl.  The second category, “white waste,” are large appliances such as ovens and refrigerators which are turned over to scrap companies.  The Third category includes e-Waste, such as computers, printers, and television sets are transferred to electronic waste recycling centers.  Finally, other “green” waste is sent to a large composting facility in Fontana.

Our waste lifecycle is starting to sound a bit complicated.

Burbank Public Works is now developing our third landfill site.  The first two locations are closed, and are located in the area above Fire Station 16 bordered by Bel Aire as it winds its way past the Starlight Bowl into the De Bell Golf Course.  Both Landfills 1 and 2 have been closed since the early 1970s.

Landfill 3 opened in 1971, and is located above the Starlight Bowl. Landfill 3, according to Molinar, is licensed to accept up to 240 tons of waste a day, however normally the site averages between 120~130 tons each day.  The landfill is expected to continue in operation for up to 60 more years.

Upon delivery to the landfill, heavy equipment operators take control of the waste.  They distribute the waste in a working area, cover it with dirt and soils, crush and compact the waste, and then repeat the cycle.  Watching the process is kind of like watching a closely synchronized ballet of giants.  At the end of the cycle, it is really difficult to see exactly where the waste lies, and once again it falls under “out of sight, out of mind” for the average resident.

Non-city, or private waste collection companies, while required to comply with Burbank’s environmental standards, dispose of waste in other regional landfills.

Operating a refuse collection and landfill operation is no trivial activity.  In fact is a science that brings disciplines ranging from conservation, to ecology, logistics, and resource management, all the way to producing energy from landfill gas.

A byproduct of landfill operations is the production of gas, including methane, a destructive greenhouse gas.  In the 1970s and 1980s the Environmental Protection Agency (EPA) began work with several regional landfill operators to explore the potential of harvesting gas production from landfill sites, and returning that gas to energy production for contribution to power grids.

Burbank began development of a gas to energy project as a joint effort between Public Works and Burbank Water and Power, and in November 2001 the first microturbines producing power from gas went into production.  The system has been upgraded since initial deployments, and is now producing 250 kilowatts from a single gas turbine.  Molinar noted “this is enough to provide power to nearly 275 Burbank homes.”

Commitment to a Green Burbank

Molinar continually brings discussion related to waste collection and landfill operations back to protecting the environment, whether it be through compliance with state and federal laws, or through simple common sense and a commitment to Burbank’s quality of life.

All landfills are sealed from the underlying soil with geo-composite membranes called Leachate which prevent absorption of toxins from waste finding their way back into the eco-system.  Water or fluids squeezed out of the fill are collected, tested, and cleaned, and sent into the general sewage system.

Even after a landfill has been closed, such as Landfills 1 and 2, settling continues.  A good example of this may be the switchback service road starting near the Starlight Bowl winding its way down to Fire Station 16.  When built this was a good, even road from top to bottom. Today it is a roller coaster of drops and rises occurring over time as fill below the road continues settle at different rates based on the materials below grade.

The state requires even closed landfills to comply with monitoring and management regulations up to 30 years following closure of the fill site.  In Burbank both closed sites are still monitored to ensure safety for both people and the environment.

Also of note, stressed Molinar, is that all city waste or refuse collection trucks run on natural gas to reduce the amount of CO2 produced while collecting waste.

Trash attracts hungry animals and birds.  A landfill presents an enormous smorgasbord of goodies for seagulls, pigeons, and rodents.  Seagulls and pigeons pick up their goodies from the landfill, and fly away dropping wrappers, food, junk, and other mess in our streets, yards, and on top of cars when carrying their booty to eat.

Burbank, not wanting to hurt the scavenging birds, uses a unique method to clear the landfill site of unwanted pests.

Joe Suffredini, owner of Avian Entertainment, drives up the hill 3~5 days a week with a team of 3 Saker Falcons trained to scare nuisance birds away from the landfill.  “Falcons are natural predators” says Suffredini.  “If a seagull sees one of the falcons enter the area, the seagull will normally beat a hasty retreat.”

While other area predators such as the peregrine Falcon and Red Tail Hawk will also go after birds, normally they avoid the Saker Falcons when they are working.

Suffredini’s falcons are all captive bred, and work primarily at area landfills.  However, he also provides trained birds to the entertainment industry, and his company manages ravens, crows, hawks, falcons, and even eagles – although only the falcons are used for pest removal.

After spending the morning driving up and down Burbank’s hills, walking around the landfill, checking out weigh stations recording each waste removal truck’s load, watching falcons working hard to keep the site free of pests, learning about yet another Burbank initiative in green energy production, it is clear waste removal is a lot more complicated than simply determining whether or not to use a green, black, or blue waste bin.

Molinar and his team keep our streets clean, protect our environment, and as Molinar concluded, “we are here to serve the people of Burbank.”  Enough said.