An 11 year-old girl walking home from school on Monday, was approached by two men in a car who tried to lure her with an offer of money.   Police today issued a warning to the general public about the incident.

Site of the attempted abduction is just a half block from Bret Harte Elementary School. (Photo by Ross A. Benson)

According to Burbank Police, the girl was walking home from Luther Burbank Middle School, when she was approached by the suspects at Wyoming Ave. and  Lima St. shortly after 3 p.m., March 4.   The men were in what is described only as a “small white dirty compact car.”  When the car pulled up next to the sidewalk where the girl was walking, the passenger leaned out of the window and yelled, “Hey you!  Want some money?”  According to the girl, the man was holding what appeared to be several bills in his hand, as he extended his right arm out the car window.

Fearing that the men were trying to lure her to the car and possibly abduct her, the girl turned and ran away.  What the girl did is exactly what police advise children to do when approached by a stranger. “Children should never go near a stranger’s car.  They should fold their arms to avoid being easily grabbed, and run away as quickly as possible.   They should also scream for help and run to the nearest safe adult to seek help.  Call 911 immediately,” according to police.

The police officer in whose beat the incident occurred, notified Bret Harte Elementary School on March 5.  The school’s principal, Sheari Taylor, sent home a letter on March 6, advising parents about the incident, and asking parents to talk to their children about personal safety. According to Burbank Police spokesman Sgt. Darin Ryburn, officers regularly visit the schools in their beats, talking to principals and staff to keep lines of communication open.

According to Dr. Brian O’Rourke, principal at Luther Burbank, “Notification to parents about this incident will be sent via the school’s web site and Facebook page.”      The police department sent out an alert via Twitter this afternoon. 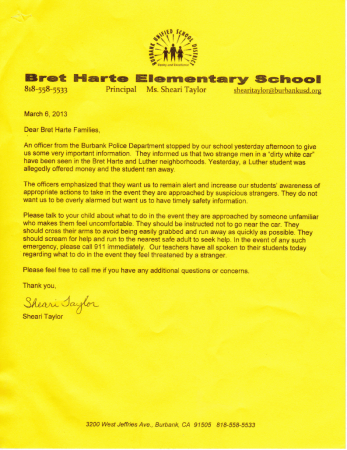 Letter sent home with Bret Harte students about attempted abduction just a block from the school.