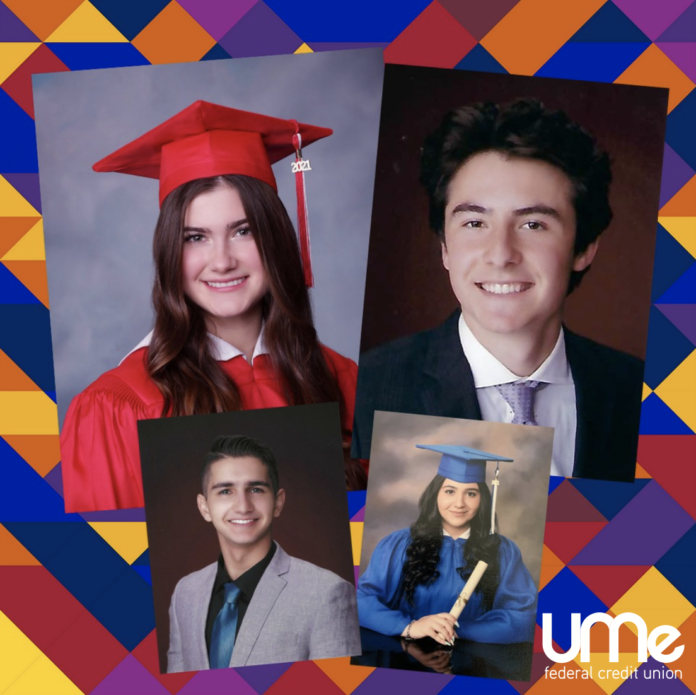 Whether it is helping open a first savings account or buy a first car, UMe is always there for its members during all of life’s milestone moments. The college experience is also one of those milestones, and the expenses that go along with that can weigh heavily on a student’s mind. That is why the credit union created the UMe Super Awesome Scholarship – to help two deserving students in Burbank achieve their big college dreams, with an award of $2,500 each.

Like in 2020, instead of two super awesome students receiving $2,500 scholarships, the credit union is naming two additional surprise scholarship recipients again, each receiving $500. Says Anita Hutchinson, UMe Credit Union Chief Marketing Officer, “We were inspired to give two extra awards again this year because we had some really great applicants – there were just too many deserving students to choose from. And in another year of unprecedented schooling for these kids while navigating a global pandemic, we thought it would be a good way to spread some joy.” Through its scholarship program, UMe is honored to support these students and their ambitions. The credit union believes that all four of these Burbank-area high school seniors will go on to do big things in life – and looks forward to being with them along every step of the way!

UMe is proud to announce the recipients of this year’s scholarship program:

Orion Spatafora from John Burroughs High School received a $2,500 UMe scholarship and will attend the University of California, Santa Cruz where he plans to study Film and Digital Media with aspirations of becoming a Film Maker and Entrepreneur.

Danielle Swaisgood from John Burroughs High School received a $2,500 UMe scholarship and will attend the University of Wisconsin-Whitewater where she will major in Biology in hopes to become a Physician Assistant.

Caroline Bagumyan from Burbank High School received a $500 UMe scholarship and will attend California State University, Northridge where she will major in accounting with the goal of entering the accounting and finance world.

David Aghajanyan from Burbank High School received a $500 UMe scholarship and will attend California Polytechnic State University where he will major in physics with the goal of becoming a Nuclear Physicist.

UMe’s commitment to education shines through in all its actions. Founded by Burbank teachers (81 years ago this month) the credit union has always considered the Burbank Unified School District a part of its organization. Many of the credit union’s volunteer board and supervisory committee members are current and former employees of the district. Creating the first student credit unions west of the Mississippi circa 1974, creating a paid internship that gives students experience in all departments of the credit union called the UMe Student Internship Program, and more recently, hosting virtual financial education simulations for high school students in Burbank, have been some of its most cherished accomplishments.

The UMe Super Awesome Scholarship was created in 2018 to support students and their future academic endeavors. The application consists of a student’s academic record, personal essay, letters of recommendation, and student activity. Applications for 2021-2022 academic year will be announced on UMe’s website and social media channels late summer 2021. Applicants must be UMe members for at least 3 months to be eligible.