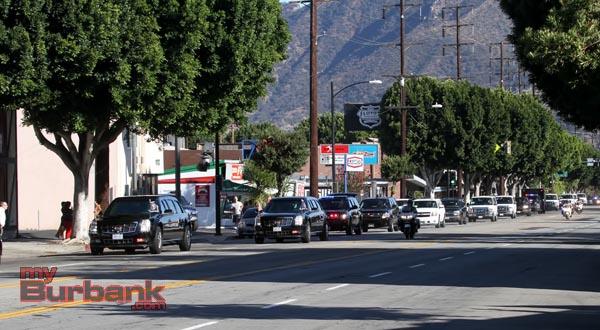 CHP Motorcycles are seen escorting the motorcade which traveled quickly northbound Hollywood Way back to the Bob Hope Airport. (Photo by Ross A. Benson)

Why is it necessary for the California Highway Patrol to have their motorcycle officers race at high speeds through our streets during a Presidential motorcade?

If you haven’t seen the video, check it out at the end of this story.  It was taken at the intersection of Hollywood Way and Victory Blvd.  The President is on his way from Bob Hope Airport to appear on the Tonight Show with Jay Leno.   His limo appears to be moving at about 40 mph.  The CHP motorcycles look like they are going at least 90 mph.

Over the years I’ve seen motorcycle officers speed ahead of one kind of procession or another to block an intersection.  When the Burbank Rose Parade float is towed over to Pasadena, the Burbank Police motor officers race ahead of the float that is being towed at less than 20 mph.   And we’ve all probably seen the private motor officers escort slow moving funeral processions.

But this Presidential motorcade was different.  The motorcycles were flying down Hollywood Way.  And for what purpose?  All of the cross streets were blocked by police cars.  Several other police departments besides Burbank were utilized to perform this huge task.   So those CHP motorcycles weren’t going to block any streets.

Maybe they were looking for cars that somehow got onto Hollywood Way or Alameda Ave.  What were they going to do, ram them with their motorcycles?   Maybe they were there to tell folks to stay on the sidewalk — a job that could more effectively be done by a police car with a loud speaker.

Possibly they were there to stop any would be assassins.  At 90 mph they could spot a guy with a gun in the crowd along the street, right?  And what if someone did try and attack the Presidential limo.  It’s built like a tank.  And the Secret Service, whose job it is to protect the President, would be all over the place, whisking the President to safety and taking out the threat.

So what are the CHP motorcycle officers really there for?  I don’t want to cast dispersions on them.  I’m sure they are among the CHP’s finest, and law enforcement professionals.  But from what I saw on the video, it sure looks like they were trying to impress the Prez.

I’ve talked to some of our police officers about this, and they too have concerns about the high-speed maneuvers they have seen.  One told me he just stays way out of the way when the CHP motorcade detail comes to town. That’s probably good advice for all of us.

But here is something to think about.  What if a child or a cat or dog were to run out into the street, or someone accidentally pulled their car onto the street as these motorcycles were zooming by.  A child or an officer could be killed (as has happened in other parts of the country during Presidential motorcades).   Is it really that important for anybody, even the President of the United States, to have motorcycles racing at high speed to get to an appearance on a TV show?

By the way, in the past, Presidents have been able to land in their helicopters at NBC, thus sparing the public from the inconvenience — and in this case the danger — of a motorcade across town.

This video ‘tweeted’ in by @edithc32 shows the motorcade traveling down Hollywood Way at Victory.  The motorcade is going about 40 mph and the CHP motorcycles are speeding by.