Thoughts From the Bullpen

All you see on national news is that Republicans and Democrats can’t work together and the result is people are not getting paid and citizens can not get services, although Congress still gets paid.

Tuesday night in Burbank, citizens had complete and total access to not only their elected officials but also to the City staff that their taxes pay for.

Burbank’s City Council once again picked up from last year Town Hall idea and had anther Q & A meeting, this time with Luther Middle School serving as the host.

It was also night that was somewhat subdued with the loss of five Burbank young people Saturday morning.  One of the victims families was present in the beginning of the meeting as Mayor Emily Gabel-Luddy talked about the tragedy before holding a moment of silence for the victims.

This by far is one of the best ideas that the Council has had in years.  First, they had a basic theme for the night, which was the airport’s expansion into 58 unused acres that once developed, could bring in a sizable chunk of tax money in through retail sales and bed fees at newly designed hotels. One of the main reasons this was picked is because of Luther’s proximity to Bob Hope Airport.

After a presentation which was similar to the one held a couple of weeks ago, it was now time to open the meeting to questions from the audience, which was to be the balance of the meeting. 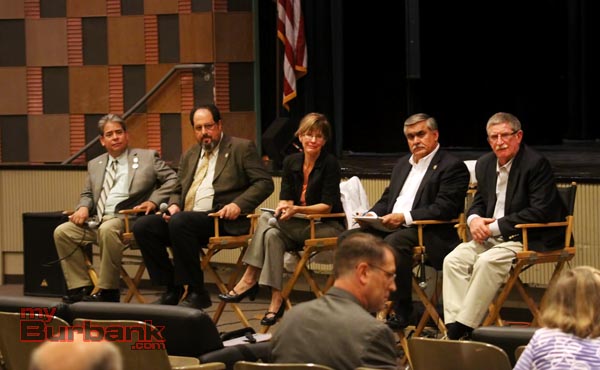 Burbank’s City Council listened to all resident’s questions and gave immediate feedback(Photo by Ross A. Benson)

Now remember, as professional politicians are gathered in Washington and unable to communicate, here in Burbank we have five Council Members that are not loyal to a party, but directly to the citizens that elected them. They were there for as long as the public wanted to answer any question that was throw at them.

There were over 75 citizens in attendance and they were able to talk about anything on their minds.  Not only were the five Council Members there to answer questions, but every department head in the City was also on hand.  These were not just hand-picked staff members, but the bosses themselves, the bottom line people who are in charge of each different department.

Some of the questions dealt with the airport and the transportation center and new terminal. What I find interesting is that the airport officials and city officials have gone out of their way to use the word ‘replacement’ while there are still members of the public that use the work ‘expansion’ when talking about the aged terminal.

The terminal is old, outdated and deemed to be in a dangerous location by the FAA, who I would ask directly but they are shut down.  The current 14-gate terminal needs to be replaced with a new 14 gate terminal in a better location.  While this is being done, 58 acres near the new location can also be developed to bring in more revenue and make the airport more attractive to travelers.

This fight in terminology will be the largest fight for the next two years until the Measure B project comes up for election of May, 2015. Watch as opponents constantly use the word as a scare tactic to bolster opposition. 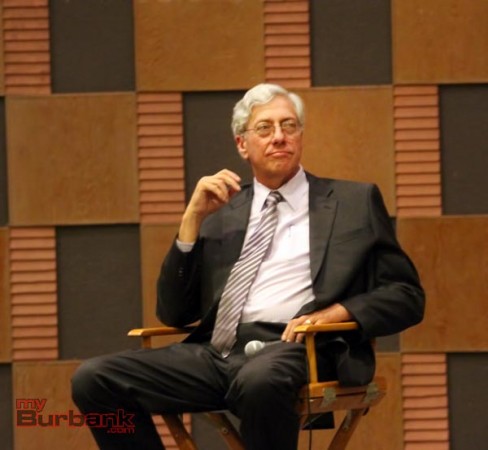 Other citizens asked a variety of questions that were important to them. There was a discussion of a dog park, which everyone is in favor of, it is just a matter of trying to find a location and the money to fund it. Sidewalks on Screenland came up with their timetable and a concern that they would disrupt Christmas activities.  A resident requested that next summer would be ideal since school was closed at the time.

Questions were also taken on the I-5 construction at the Verdugo off and on ramps and improvements to 5-Points.  Someone also pointed out the badly needed paving that Hollywood Way was in need of and they were told that improvements were about to be made.

There was also a little bit of rambling when one resident complained about smoking restriction and another about wanting a stop sign somewhere near Buena Vista.  Both speakers were given the time they needed and were both responded to.

Another had a passionate plea to rename Reservoir #1 in honor of Earle C. Blais, who was one of Burbank’s water pioneers and visionaries (Read our story from earlier this year). Ikea was also brought up and the public was told that they are currently in a 45 day permit review period for their new location. 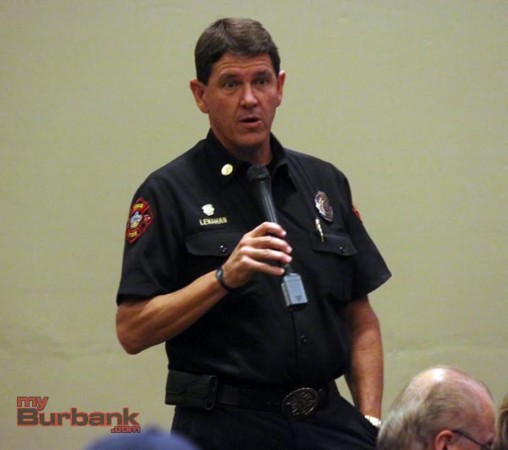 Burbank Fire Chief Tom Lenahan was able to talk about firefighting techniques when solar panel are involved (Photo by Ross A. Benson)

Traffic enforcement concerns as well as fighting fires with solar panels were also brought up and both the Police and Fire Chiefs were on hand and had immediate answers.

Probably one of the best moments came when one neighbor commented on the growing memorial for the five killed Saturday morning.  He just wanted people to know how far we have come when he said how impressed he was that mourners of all races and religion were hand and were together as one.

The meeting lasted a little over two hours and all speakers were respectful and their questions answered with honesty and a sense of caring.

This was truly a night of Burbank at its best, with the comfortable format and the public’s questions in the forefront. You felt more like you were sitting around with a bunch of friends talking about issues then a meeting were you were not involved.  Yes, you can go to any council meeting and speak at oral communications and sit down and hopefully get a comment 20 minutes to an hour after you speak.

Tuesday night you had an immediate answer, from the department head that the responsibility of executing the responsibility involved.  This was government being directly responsible to it constituents. After the meeting, many stayed and talked to citizens for another 20 minutes one on one.

You may agree or disagree with different council members, but there is no doubt that they are responsive to all citizens with this Town Hall Meeting format incredibly successful.

Elected officials responsive to all their citizens, imagine that Congress.