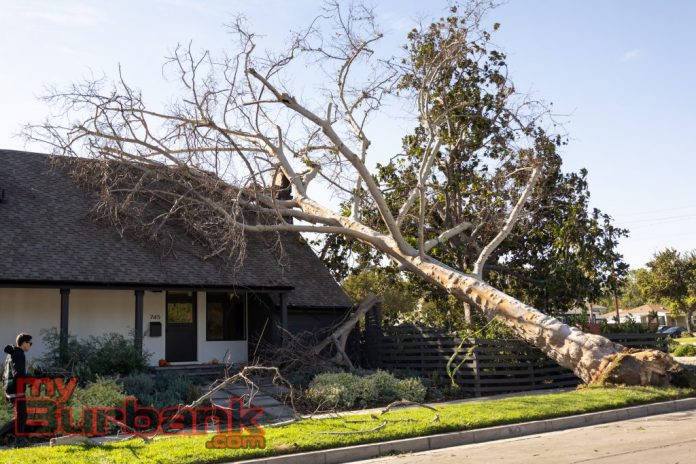 The largest Santa Ana Wind event since October of 2019 has impacting the Southland. Gusts of up to 30 mph were recorded at the Hollywood Burbank Airport.  Wind gusts of 60-90 mph were recorded around the Southland. The wind has left Burbank with multiple downed trees and branches, multiple downed power lines and power outages, and leaves and debris all across the city. A red flag warning was is in effect through Tuesday, October 27, due to strong gusty winds, and very low humidity.

A large sycamore tree fell onto a house on the corner of Chandler and Reese on Monday, October 26.  Homeowner Josh Minney told myBurbank that his daughter and father-in-law were playing in the backyard of their home when a large 60 foot sycamore tree came crashing down on the house, knocking out the chimney and sending thousands of pounds of debris in their direction.

Minney said, “One of the best parts about Burbank are these beautiful trees, and we love the tree in front of our house, and the last couple years we noticed that it wasn’t growing as well and there was a fungus growing around the root of it.”

Minney said that he contacted a local arborist who advised him that he was familiar with that tree and that Minney should contact the city to have it removed. Minney said he contacted the city 12-18 months ago about the matter. He says the city inspected the tree and declared it to be safe at the time, and that a follow-up inspection would be conducted in a year.

“Luckily nobody was hurt, I’m thankful for that” said Minney.

A vehicle driving East in the alleyway between Tujunga and Angeleno drove over a downed power line which then became entangled in the rear driver side wheel well. Burbank firefighters evaluated the situation and determined it safest for the driver to remain in the vehicle. Burbank Water and Power shut down electricity to the line and cut the line free. No customers were affected, as the downed line was only supplying electricity to a streetlight.

Burbank Water and Power crews were also called to the 3500 block of West Magnolia for a large canopy that had been draped over powerlines due to the wind. Crews attached a rope from above and slowly pulled the canopy up and over the power lines. No power lines were downed as a result, however power in the area was shut down for a short period of time.