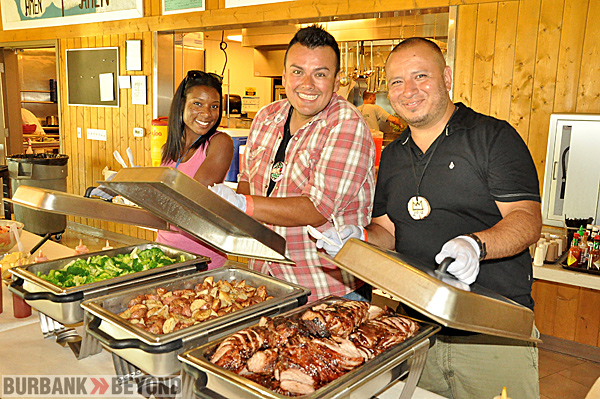 Young Variety of Southern California held its 3rd annual karaoke mixer at Michael’s Bar and Grill this summer and it continues to grow in popularity.  This year YV of So Cal raised money for kids who are unable to afford school supplies (AKA: Backpacks for Kids).  YV of So Cal is an non-profit charity that benefits local children who suffer from poverty, illnesses, and every day struggles.  The most recent group that benefitted from support of YV So Cal is Camp Hollywood Heart.  CHH is a an annual summer, art-based camp that educates and cares for dozens of teens and young adults who’ve been affected by HIV/AIDS.  YV helps a number of charities throughout the year.  Later in October, YV will pay their annual visit to Hollygrove for the highly-anticipated Halloween Carnival for kids in foster care and/or family reunification situations.

YV So Cal is a branch of the very large tree called, “Variety – A Children’s Charity” which celebrates its 71st birthday this September.  It all began on Christmas Eve, 1928 in Pittsburg, PA. when a one-month old baby girl was left in a theatre by her mother in the hopes that the members of the theatre would take care of her.  Baby Katherine, was only four weeks old when her mother grievingly wrapped  up her newborn and delivered her to the Sheridan Theatre in Pittsburg, for what would be the last time she would see her infant daughter.  the men of the Variety Club at the Sheridan Theatre found the tiny sweet bundle on a seat in the empty playhouse with a devastating and heart-wrenching note pinned to her little dress:

“Please take care of my baby. Her name is Catherine. I can no longer take care of her. I have eight others. My husband is out of work. She was born on Thanksgiving Day. I have always heard of the goodness of show business and I pray to God that you will look out for her. — A Heart-Broken Mother”

What would deem inexcusable and unforgiveable in today’s times regarding the recent safe-surrender laws of California, this mother’s action in 1928 was in no way similar to today’s crimes.  This was a mother in the height of the Great Depression who was hoping for a greater destiny for her baby girl.  This one and most likely undeniably hardest sacrifice any mother could do, turned into a most blessed act of charity that would span globally in the next several decades, reaching as far as  New Zealand, Japan, Great Britain, Australia, Barbados & the Caribbean, Hong Kong, France and North America.  Variety helps children of the world who have to deal with immobilization, physical and mental disabilities, HIV/AIDS, runaway teens, poverty, homelessness, foster care and more.

I have seen first-hand how this charity has changed lives.  I started volunteering back in 2007 by attending a mixer on the West LA.   The charity didn’t have a photographer so I started donating my time by promoting the charity through my photos and social media.  It was a group which I learned quite quickly, was completely legitimate.  From mixers at local restaurants, I quickly got involved with hands-on events where I met with kids who were in such dire situations, that any personal problem I was dealing with soon lost its significance.  Reality is the best mirror.   I complain about traffic, my desired ‘goal weight’, taxes, bills, political spats on Facebook, too many commercials on TV, which relative is annoying me the most, and/or which song is over-played on the radio..  All of my problems vanish and lose their significance after I have spent a day with the children we are helping.  I have met kids that are very much loved by their parents and just need some financial support or an adaptable bike (Cerebral Palsy) and I have met some kids who have been completely abandoned, neglected and some who suffer from homelessness.  For a child to have been abandoned, hurt or neglected is perhaps one of the worst crimes humanity could inflict on the world.   I can’t save the planet, but can do a small part and with that, hopefully the ripple-effect takes place.

We had an event a few years ago that continues to haunts me to this day.  As I write this now, the same tears well-up in my eyes and I go back to that moment that I will not soon forget.

We (YV of So Cal) were hosting a roller-skating event for kids in foster care a few summers ago and I went to the rink in my normal role as photographer.  We provided these wonderful kids a day of skating, lunch and prizes.  Due to their sensitive situations as foster children, I do not photograph their faces out of respect for their privacy and our laws.

After greeting a few friends, I soon noticed one novice skater about the age of 8 or 9.  It seemed to me he was learning how to skate and was having a blast spinning, falling and springing back up again.   I didn’t know his story but in that moment he was having a great time testing inertia and gravity.  His little face was constantly beaming, smiling, eyes wide from the shock of a successful turn or spin, all the while trying desperately to avoid colliding with other skaters.

I moved my location to work at the end of the rink and decided to shoot pictures of my colleagues, fellow board members, and friends.  While leaning over the rail and facing the skaters, I struck up a quick conversation with my fellow board member’s 11-yr old daughter, Ella O’Neill.  Ella, now a teen has had the great fortune to have a mother who involved her young children in volunteer events such as this one from an early age.  Ella and her two brothers have grown up doing charity work.  Bravo, Adrianne and Jim O’Neill!

While chatting with Ella, I felt someone run into me and almost knock me over.  My first reaction was to grab my camera and hold it close to me so as to protect it from hitting anything or anyone.  Within seconds I realized it was the same young boy who accidentally ran into me.  I knew the only reason he ran into me was because I was completely in the way of the skaters entrance/exit and not paying attention.  In my assessment, he could not stop because he hadn’t learned how to work the rubber stoppers on his rented skates.  I felt bad because I knew I was in the wrong so I bent down to help him up.  When he saw me reaching for him, he scrambled backwards on his backside and put his hands up, slammed his eyes shut and shook his head frantically as to beg me not to strike him.  I must have seemed like a giant to that little boy.  Not only am an unfamiliar 5’8” adult, but I was towering over him and coming towards him.  I was there only to help him up, but in his little mind and judging by his terrified reaction, towering approaching adults have not been kind to him.  His foster family saw what happened and immediately began signing to him that everything was OK and it was just an accident.

Just when I didn’t think my heart could sink any lower, I learned in that split second that he couldn’t hear my apology and we couldn’t communicate because he was hearing-impaired and I didn’t know how to sign.  His foster family scooped him up and off he went.  I stood there ready to cry for the child that mistook me for an abuser.  Even though my intentions were good, I still made him feel threatened and scared.   My problems are benign.  Now you, the reader know why we do what we do as volunteers and board members of Variety.

I thank God for the family I was born into.  I may not have had the ‘perfect’ childhood (who has?), but I was loved, nurtured, provided for and grew up in a normal Burbank home where I knew I was safe from harm.  We laughed, celebrated holidays, went to the beach on weekends, I got grounded numerous times, and I always had new school clothes every September.  Thanks, Mom!