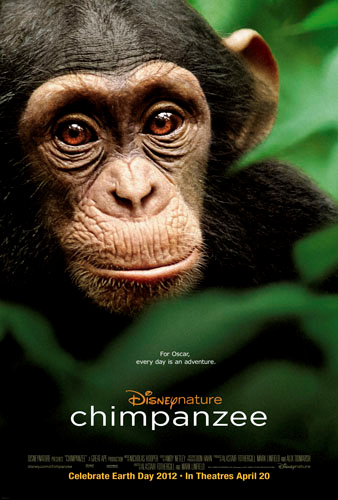 At a preview of “Chimpanzee” I saw a Disney movie the way it should be seen — with a child.

My 6 year-old granddaughter, Madison, joined me as we watched this latest offering from Disneynature.   It’s a delightful story, sometimes sad, sometimes scary (but not too scary) with a cute star.   Oscar, the orphaned baby Chimpanzee, is a scene stealer.  The photography is superb, the setting is spectacularly beautiful, and the music is catchy.

The movie tells the story of a family of chimpanzees in the rain forests of Africa.   It certainly gives the viewer plenty of insight into the everyday lives of chimpanzees.  The cute little star of the movie got plenty of oohs and ahs from the audience.   There is plenty of drama, especially when the chimpanzees clash with a rival group of sinister-looking chimps led by the movie’s villain, Scar.  Apparently the name was a nod to one of Executive Producer Don Hahn’s biggest successes “The Lion King.”

While reminiscent of the death of Bambi’s mother, the “disappearance” of Oscar’s mother isn’t too heavy for younger children.  Other than chimps chasing each other through the jungle, there really isn’t much in the way of violence.  The way the bad chimps are portrayed deftly gives you the feeling of impending violence without the blood and guts.

Tim Allen narrates the movie.  He does a good job of humanizing these wild animals as he tells the story.  The film’s makers have cleverly merged bits of his “Tim the Tool Man Taylor” into the script, which adds some nice touches of humor for the adults in the audience.

Equally interesting was the brief story of how the movie was made.  The clips of the crew working in inhospitable conditions on location in Africa ran alongside the credits.  Like other local folks who stay to read the credits (nearly everyone in Burbank is in show business or knows someone who is, so you don’t leave until the run) we found this added feature quite interesting.

For those of us in the audience old enough to remember, “Chimpanzee” evokes memories of Winston Hibler narrating Disney’s “The Vanishing Prairie,” or “The Living Desert.”     Hibler, who died in 1976, would no doubt have enjoyed “Chimpanzee” as much as my granddaughter and I did.

Kids Love the Tale Of Turnadot at The Colony Theatre

‘Growing Up in Burbank’ – Book Review

A Funny Thing Is Happening at the Garry Marshall Theatre