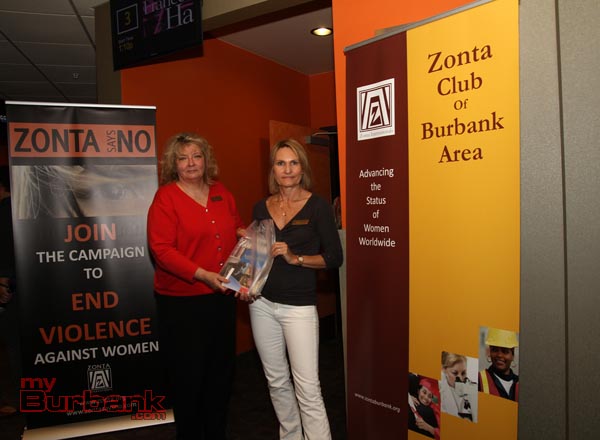 The Zonta Club of Burbank has been helping and supporting women in the Burbank area since 1936.  Many Burbankers may have heard about the Woman of the Year luncheon, which every fall has been recognizing women who are outstanding community leaders. It’s also Zonta’s signature fundraiser, enabling the club to help women throughout the year.

Zonta has been awarding “Wings” grants to adult women who have endured a major setback, and who want to re-launch by earning a degree or completing vocational training. For young girls and boys, Zonta has been donating biographies of remarkable women like Amelia Earhardt to Burbank elementary schools.

Zonta’s members have also been aware of the social ills that can fall especially hard on women and the children who depend on them. On behalf of the Burbank Temporary Aid Center, Zonta has collected not only food but items of personal hygiene desperately needed by homeless women.

But as laudable as these programs are, they don’t completely explain why the Zonta Club of Burbank has survived while many other service clubs have not. Long time Burbankers may recall that Women’s Club of Burbank, at one time hugely influential, did not survive the sea change in women’s roles. And there was once six Zonta clubs in the San Fernando Valley, with only the Burbank club remaining.

Why? “We have to constantly modernize to appeal to women of all ages,” explains member Nickie Bonner. “We have to compete with corporations that are repairing their image by having their employees do pro bono community service. And young people like my daughter are being lured by newer organizations that are using tools like social media to engage their members and advocate for a cause.”