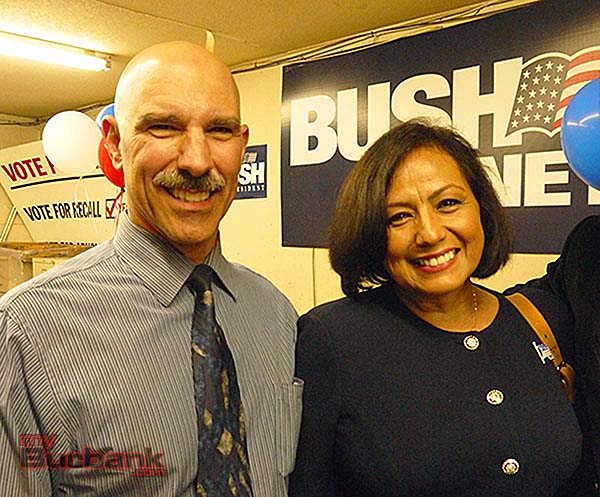 The new headquarters is located on the ground floor of the California State Republican Party Headquarters, at 1901 W. Magnolia Blvd.  The suite of offices and meeting room area will allow the party to use the facility for meetings, training, and volunteer programs.  In addition, the party has added Executive Director Scott Hounsell, who will oversee the work of the headquarters.

“We haven’t had an executive director before,” said Mark Vafiades, Chairman of the Republican Party of L.A. County.  “We can use the headquarters and Scott as a resource, and offer technological infrastructure to help our candidates.”

Although the party faithful attending the open house were well aware of the Obama Administration scandals in the news this week, including Behghazi and the illegal IRS activities, conversation among those in attendance seemed more focused on local issues.  The need for more Republicans to run in non-partisan local elections, such as school board and city council races, was a popular topic.

Taking a term from baseball, Vafiades said, “We need a farm team,” adding, “Republican candidates need to know the local community and start with these non-partisan offices, rather than having someone who just decides to run for Congress.”

Among the dignitaries attending the open house were Assemblyman Tim Donnelly, whose district is in San Bernardino County.   Donnelly has been mentioned as a possible candidate for governor.   Also in attendance was former Treasurer of the United States, Rosario Marin.  She served in that office from 2001 to 2003 during the term of President George W. Bush. If you look in your wallet, you may have a bill with her signature printed on it.

Made up of elected County Central Committee members from each State Assembly District in Los Angeles County, the organization has been without a permanent office for the past three years, according to Hounsell.  At one time they had rented an office upstairs in the State Headquarters.   During election campaigns, the headquarters will also be used for phone banks and other campaign activities.  The headquarters will be open weekdays from 9 a.m. to 5 p.m.